The Mansala Project encompasses an area of 48km2 to the south of Alahiné.

Systematic exploration of the Mansala Licence commenced in December 2020 with an extensive program of reconnaissance soil geochemistry.

The distribution of these high values appears to mirror topography, which itself is controlled by outcropping lateritic and ferricrete knobs and ridges. The possibility exists that these topographic highs are the product of topographic inversion, where lateritic fill in ancient river valleys becomes cemented with iron oxides and are strongly resistant to erosion. Thus, with ongoing erosion, ancient river valleys might now be expressed as hills and ridges of this resistant material. Potentially, such inferred ancient river valleys may host either hard rock or deep lead gold mineralisation. Artisanal miners have exploited gold shedding from present day topographic highs but have not addressed potential deeper mineralisation within or beneath the hills and ridges. 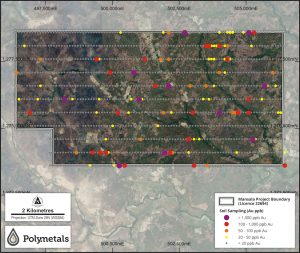 Also, of interest in the NE Quadrant of the Mansala Licence is an area of elevated topography. This area is geochemically prominent, with anomalous concentrations of Au, Ag, As, Mo, Sb, Fe, Cr, Ti and P present in soils. The significance of these responses is not known but may be indicative of mineralisation at depth. Numerous artisanal workings in this area lend credence to this possibility.

A rock chip sampling program was undertaken in H1 2022 to confirm the nature and gold content of material extracted by artisanal miners in the NE Quadrant. A total of 103 samples were collected from the walls of abandoned 1m x 1m artisanal mining shafts and directly from active artisanal workings. 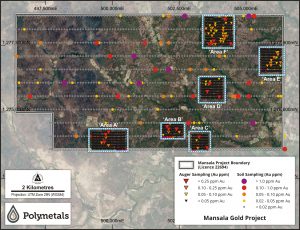 Best auger drill intervals taken at end of hole within Area F include 1m @ 1.09 g/t Au and 1m @ 0.34 g/t Au. Interpretation of auger assays received suggest that Area F is very prospective and likely to have multiple mineralised trends. As a priority, auger assays revealed an additional >300m long eastern mineralised auger trend (see Figure 2), near parallel to the mineralised pit sampling trend and likely to merge in the south.

All single station anomalies identified by the auger program are important and warrant further investigation. Mapping and sampling of priority targets within each of the defined areas will confirm the appropriate follow up method. 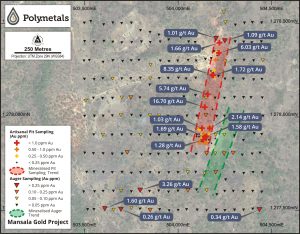 The airborne magnetic survey at Mansala was conducted by AeroPhysX in June 2022 on 100m-line spacings. The objective of the approximately 500-line km survey was to provide detailed data to determine the structural controls of mineralisation and information on the nature and disposition of host rocks currently obscured by lateritic cover. 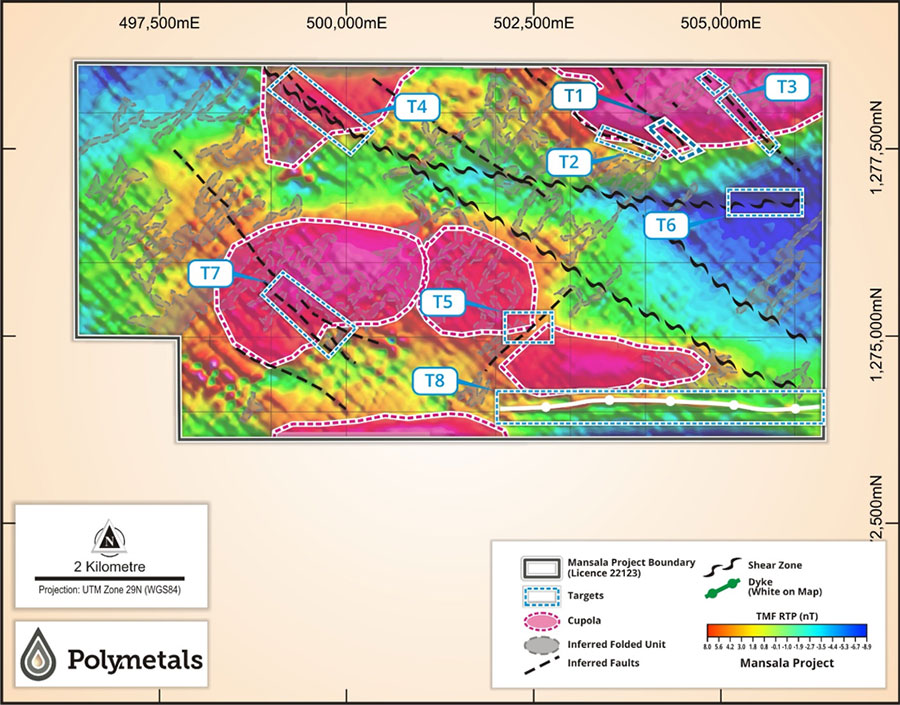